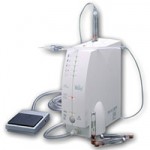 Because of its construction (truncation at an angle), a needle of a traditional syringe can be moved from its target even by 5 mm. That is why so-called perineural anaesthesias are often not very precise, and consequently less efficient. According to scientific researches, at least 25% of perineural anaesthesias are ineffective. In The Wand, a special construction of applicator and modified technique of administration, eliminate the inconvenience.

Administration of anaesthesia by The Wand is painless for the patient because The Wand administers anaesthesia solution very slowly – under control of the microprocessor. In opposite to traditional syringes, where the solution is forced into with big pressure, with The Wand it is absorbed locally, which eliminates filling of expanding anaesthesia sollution tearing tissues, and eliminates pain. The computer doses the solution precisely, which cannot be achieved while administrating manually. Its contruction allows anaesthetization without an effect of “facial spasm” or deformation of facial features caused by anaesthetic agent.

We use anaesthetics manufactured by renowned pharmaceutical companies selected individually for particular patients, depending on their health and sensitivity to pain and on the type and the expected time of procedure. Therefore our therapy is safe and – as much as possible – painless and comfortable.

The Wand painless computer-assisted anesthesia is highly appreciated by patients, especially the younger ones. It is not uncommon that during longer procedures on the dentist’s chair our patients become so relaxed and comfortable that they just fall asleep…